It was just a decade ago when the Census Bureau printed 17 million maps and deployed 600,000 census-takers who lugged around satchels weighted down with paper documents. Each morning, the enumerators met in-person with a supervisor to learn their day’s route, and they tracked their cases, hours, miles and expenses on paper.

Since the 2010 Census, technology has exploded. The use of GIS and satellite imaging, information-gathering methods, automation, and in-field applications make this year’s census the most robust and high-tech outreach effort in the bureau’s history. For the first time, the bureau is collecting responses online, as well as by phone and mail. According to Adobe, which powers the bureau’s survey website, taxpayers will save an estimated $15 million for every 1 percent of the population that responds to the census on the internet. Much of the cost and time savings come from the canvassing period, which involved validating, correcting, or deleting existing addresses.

“Approaching 2020, the questions were: Do we physically have to go out, pay people to walk and put eyes on every structure in this country, or are there places where there’s a level of stability, where there’s not that much growth or change happening?” said Gregory Hanks, the deputy chief of the Census Bureau’s Geography Division. “We opted to take advantage of technology to avoid the time and the cost of sending people into the field.”

Every 10 years, in what is one of the federal government’s largest civilian operations, the Census Bureau sets out to count every person in the country. This year’s survey reached about 330 million individuals living in roughly 140 million housing units. Preparing for this event is an enormous undertaking that involves a decade of research and testing, using technology that will inevitably change before the official count is completed.

The increased use of technology became instrumental this spring when the bureau had to react quickly to the pandemic to help slow the spread of the coronavirus. The bureau suspended in-person data collection and set up a callback option in 14 languages to accommodate those dialing into the call center, which was working at reduced capacity due to social distancing. They shifted outreach efforts to virtual engagements and launched a series of new ads in 33 languages aimed at increasing online response (As of July 23, 92 million households had responded, with four out of five doing so online.)

Originally, 350,000 census takers were set to hit the streets this spring, following up with the residents of every household that had not responded via the online or paper forms to collect census information. Instead, the census enumerators began following up with residents in mid-July, each armed with an iPhone and an app to optimize their routes and track their cases, hours, miles, and expenses. They are visiting residences previously verified using satellite imagery and know ahead of time what language the residents speak and when they are likely to be home. Their work will conclude before the end of October. 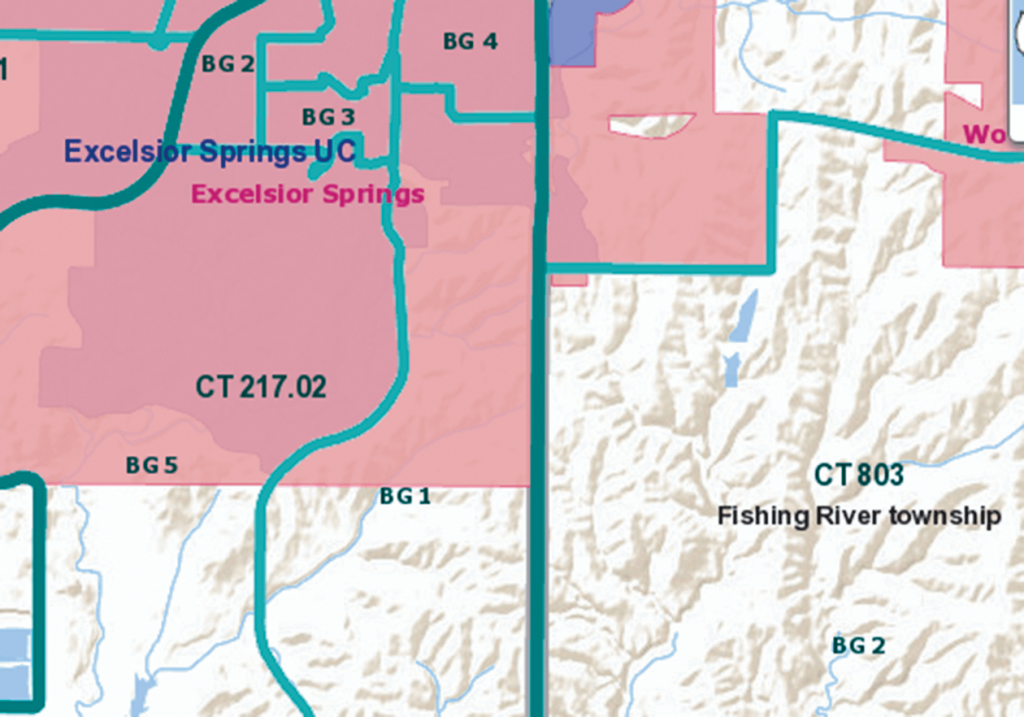 A DELIGHTFUL STORY ABOUT REUSE

The Census Bureau has been in the geospatial intelligence business for decades. TIGER (Topologically Integrated Geographic Encoding and Referencing), a massive digital geographic database that automates the bureau’s mapping and geographic activities, was developed before the 1990 Census. For many years, the bureau has relied on aerial imagery from the U.S. Department of Agriculture’s National Agriculture Imagery Program (NAIP) for correct placement of residential structures, change detection, and digitizing features and boundaries. This decade, the game-changer is the addition of commercial imagery from the National Geospatial-Intelligence Agency (NGA) and a new program that, combined with address data sources, allows reliable detection of housing stability and change. Canvassing of one block, a two-hour job in the field, took about two minutes in the office.

“It’s a delightful story about reuse and return on investment,” Hanks said. “The imagery is a U.S. Department of Defense investment that’s producing real value in the civilian sector.”

In 2010, NGA signed a contract with DigitalGlobe, now Maxar Technologies, that made available the entirety of DigitalGlobe’s archives (updated daily and dating back to 1999) to the U.S. defense and intelligence communities, as well as to federal civil agencies, humanitarian organizations, and international partners. In an effort to make the archives easily accessible to its partners, NGA manages a program called Global Enhanced GEOINT Delivery (G-EGD), which delivers access to more than 1 billion square kilometers of high-resolution, unclassified imagery.

“Since 2010, the volume of commercial imagery available across the whole of the U.S. government has exploded,” said Amy Weaver, NGA’s division chief for Commercial Mission Integration. “There are a number of large users, and certainly over the last couple of years, the Census Bureau has seen a huge uptick. They are one of our top partners on the federal civilian side.”

“We had the idea that not every block had to be listed [for field workers] because some blocks haven’t changed for 20 to 30 years,” said Dan Keefe, the chief for the Census Bureau’s Spatial Data Update Branch, which implemented the in-office address canvassing operation. “That’s where the commercial imagery was important in comparing current with previous imagery. You could find growth, decline, and coverage issues from previous fieldwork. We were going at it every day from fall 2015 until March 2019.”

At the Census Operations Office in Jeffersonville, Ind., just across the river from Louisville, analysts learned how to use GIS tools and swipe back and forth between decade-old and current imagery. Block by block, covering each of the nation’s 11.1 million blocks, they compared the two images to detect changes and update TIGER and the Master Address File (comprising data from the 2010 Census, U.S. Postal Service, and GIS files from local governments).

The analysts marked growth—for example, a new subdivision—with a pin and noted blocks that weren’t clear (often from cloud cover) for re-review. At times, they would become investigators, zooming in to find out, for instance, that a house-like structure with hay next to it was actually a barn, or a listing of two parcels included one that was just a parking lot. When in doubt, it would get tagged for a field visit. When in-office address canvassing was completed in March 2019, all addresses that needed in-person verification were added to the in-field address canvassing operation, which workers completed in the fall.

Andrea Grace Johnson, the bureau’s Assistant Division Chief for Address and Spatial Data Update in the Geography Division, said many of the analysts commented that the computer canvassing was fun. “For them, it was like traveling,” she said. For the Census Bureau, the new process significantly improved the workflow.

Before the 2010 Census, the bureau hired 151,000 field staff to canvass 100 percent of the housing units in the country—walking every city block and rural road, every hamlet and holler, and indicating all changes on paper. For the 2020 Census, that number dropped to 39,000 because so much of the canvassing was accomplished virtually.

MODERNIZING WITH THE HELP OF COMMERCIAL PARTNERSHIPS

Shortly after the 2010 Census, the bureau partnered with Esri to help accelerate some of the work that had been performed manually.

“We worked with the bureau on how to use geographic technology to identify changes in the landscape of residential property, how to automate the collecting of information and all the geocoding, and how to make sure we’re optimizing all the cases to be sent out to the field,” said Laura McNulty, manager of Esri’s National Government Sciences team. “This is the first census that has been built with geography at the heart of it from the very beginning. All together, these pieces create the most modern census in history.”

The bureau has used Esri technology to build BARCA, maintain TIGER, and develop the Response Outreach Area Mapper (ROAM) application for hard-to-reach areas. ROAM allows users to overlay socio-economic data with geographic points of interest in neighborhoods where the bureau anticipates challenges like language barriers, distrust in government, and lack of knowledge about how a census benefits the community. For instance, ROAM would help determine where (and in what language) to hold census educational workshops in libraries or places of worship.

The bureau also used Esri’s Network Analyst API and StreetMap Premium to develop MOJO, a navigation-enabled control system for managing fieldwork of cases to follow-up on nonresponders. MOJO, which leverages the cloud and has enormous processing capabilities, updates the case assignments overnight and reassigns individual routes in the morning—based on proximity, language, and availability—through a mobile app called ECaSE (Enterprise Censuses and Surveys Enabling). Through ECaSE, enumerators learned their routes and entered their hours, miles, and expenses. They could also use it for navigation and to collect and encrypt survey data from the responders.

McNulty said her team is already looking to further modernize the next census in 2030. The perpetual challenge is to lock technology in place in time for a census dress rehearsal, years before the official count. “Imagine that today you are trying to define what the technology is for something that’s not going to happen for 10 years,” she said.

The Census Bureau’s Johnson feels confident about the 2030 Census based on progress over the last two decades. In 2010, although the enumerators were weighted down by paper, they did have a GPS-enabled handheld device to verify locations. These devices captured GPS points for each address, which turned out to have enormous value this year.

“The bureau invested in a large, thorough survey for in-field address canvassing of the nation 10 years ago, and we’ve built on that data collection,” Johnson said. “What happened in 2010 paved the way for 2020, and we can generate savings because the lion’s share of the in-field canvassing work is done.” The good news at the government agency tasked with comprehensive record-keeping, she said: “We never throw anything away.”

WHY IS THE CENSUS IMPORTANT?

The census aims to count every person living in the United States once, only once, and in the right place. But this decennial event, which first occurred in 1790 and is mandated by the Constitution, is more than a simple headcount. Information gathered from the 2020 Census, based on 10 questions about the people living in each home (participation is required by law), will provide critical data for community funding, congressional representation, emergency management, and more. It will determine the distribution of $675 billion in federal funds, grants, and support to states, counties, and communities, to be spent on schools, hospitals, roads, and public works. In Washington, D.C., for example, the data is used to allocate more than $3 billion annually for federal programs such as Medicaid, SNAP, education grants, housing vouchers, and school lunches.

Answers to the questions allow the Census Bureau to produce a wide range of statistics about homeownership versus renting, and the size of various groups based on sex, age, ethnicity, and race. The 2010 Census, for example, told us that women made up 50.8 percent of the population. These statistics inform planning and funding decisions and can help agencies monitor compliance with anti-discrimination provisions, such as those in the Voting Rights Act and the Civil Rights Act.

Every decade, the Census Bureau provides population counts to states, which adjust electoral districts according to where numbers have fallen or risen. The census results also determine the number of seats each state will have in the U.S. House of Representatives. Businesses use census data to make decisions about where to open stores and factories, and which products and services to offer. Real estate developers use the data to build new homes and revitalize old neighborhoods.

Local governments use the census for public safety and emergency preparedness. The Federal Emergency Management Agency, for instance, relies heavily on census information for key demographic and housing data that help guide recovery efforts. For example, knowing that a large percentage of residents in a hurricane’s path speak Spanish as their primary language helps agencies deploy the right rescue personnel.